The average length of life remaining at birth, assuming people experience the age-specific death rates of a given period from birth onwards.

In 2012–2014, life expectancy at birth for females was 83.2 years and 79.5 years for males, as calculated by Statistics New Zealand Period Life Tables.

Since 2005–2007, life expectancy at birth has increased by 1.0 years for females and 1.5 years for males. About two–thirds of this increase was a result of reduced death rates at age 60 years and over.

The gap between male and female life expectancy has narrowed in recent decades, from the largest difference of 6.4 years in 1975–1977 to 3.7 years in 2012–2014. The narrowing is mainly because of faster reductions in male death rates at ages 50–74 years, although males still experience higher death rates than females at nearly all ages. 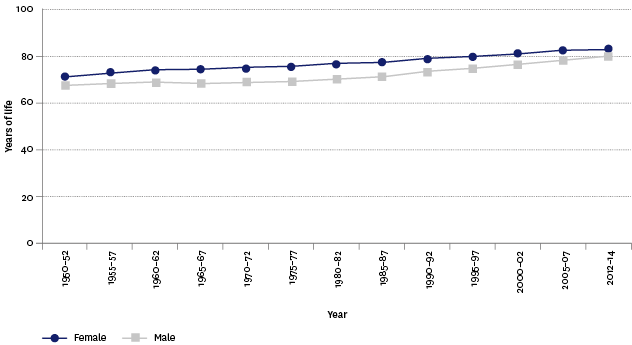 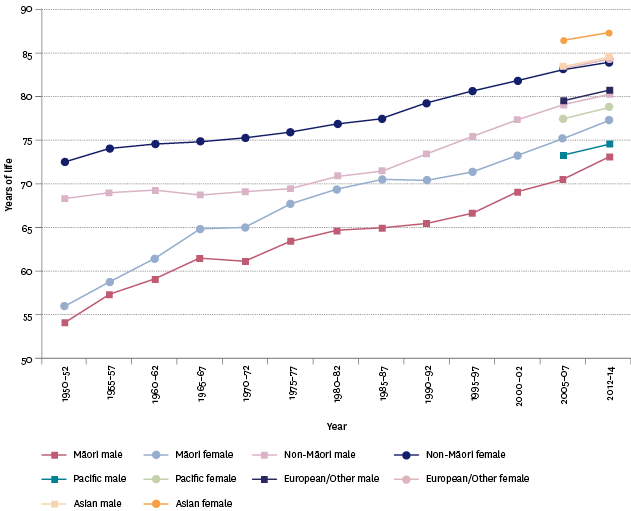 Source: Statistics New Zealand
Notes: Ministry of Health data has been used for 1980–1982 to 1995–1997. It includes an adjustment for the undercount of Māori deaths relative to the Māori population by linking mortality to census records. There is a seven-year gap between 2005–2007 and 2012–2014, which differs from the rest of the time series which has a five-year gap. Life expectancy breakdowns for Pacific, European/Other and Asian populations are available from 2005–2007.

Data for this section can be found at: www.socialreport.msd.govt.nz/documents/2016/h1.xlsx