The proportion of secondary school leavers who left school with a qualification at National Certificate of Educational Achievement (NCEA) Level 2 or above.

Upper secondary school qualifications serve as the foundation for higher (post-secondary) learning and training opportunities, as well as the preparation for direct entry into the labour market. Those who leave school early with few qualifications are at a much greater risk of unemployment or vulnerability in the labour force, and of having low incomes.

Because of changes in the qualifications framework, it is not possible to exactly compare time series data prior to 2009. Data prior to 2008 is a best fit but, again, emphasises the improvement in this measure since a low point in 2001 (37.3 percent). 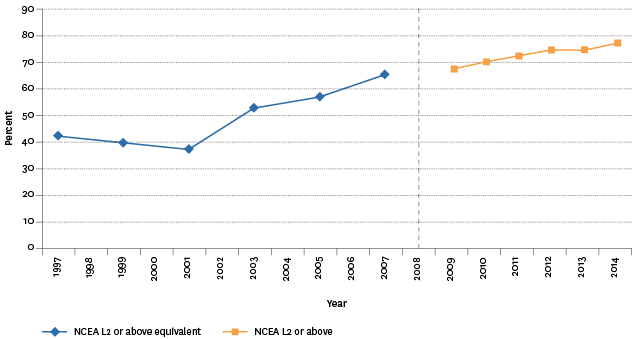 While starting from lower rates, Pacific and Māori students have made greater gains in the proportion leaving school with NCEA L2 or above, with increases of 15.5 and 13.0 percentage points respectively between 2009 and 2014. This compares with a percentage point gain of 9.6 percentage points for the total school leaver population over the same period.

The impact of socio-economic status can be clearly seen using the decile rating of the school children are attending. Deciles range from 1 to 10, with Decile 10 schools being the least disadvantaged and Decile 1 schools the most disadvantaged. Students from low-decile schools are less likely than other students to attain NCEA L2 or above. In 2014, 60.3 percent of school leavers from Decile 1 schools left with a qualification of NCEA L2 or above compared with 92.5 percent of school leavers from Decile 10 schools.

Over the period 2009–2014, the improvement in the proportion of school leavers with a qualification of NCEA L2 or above was highest for lower-decile schools, with Decile 1 schools improving by 12.5 percentage points, compared with 3.7 percentage points for Decile 10 schools. 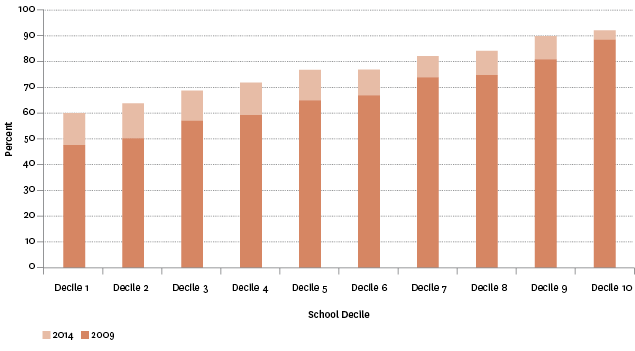 There are marked differences across regions in terms of those who leave school with NCEA L2 or above. In 2014, Wellington had the highest proportion of school leavers with NCEA L2 or above (83.3 percent), followed by Auckland (81.6 percent) and Otago (81.3 percent). This compares with Northland (69.9 percent) and Taranaki (73.9 percent). While Wellington has ranked regularly as the top performer along with Otago, there are variations across time resulting in year-on-year changes to the regional rankings.

Data for this section can be found at: www.socialreport.msd.govt.nz/documents/2016/k2.xlsx